And again, The Walter Pall's Late Summer Meeting gathered a crowd of bonsai people from all over the Europe. Even the Big names like Mauro Stemberger were there, or Wolfgang Putz! So, I think it is easy to conclude that The Walter Pall's Late Summer Meeting is becoming a one of the major european bonsai events in a calendar. And all this people are coming in a back garden of "A One Man" in a small pictoresque place in german countryside! Like a cohesional factor, Walter Pall's carisma gathers people that share same love...same passion. Are there any words that haven't been spoken about Walter Pall?
In that way, as in many others, Walter is "A Man" of outstanding qualityes, huge seductive carisma and an unlimited knowledge that he shares to all. Even more, many people in Croatia have a special and emotional "wire" with Walter. And I think he understands that and he feels it too. I am happy and proud that I'm constantly learning bonsai from Walter Pall, and that he was the first of the bonsai world Big Faces who came in Croatia and made the first big steps in changing our thoughts and technics about bonsai. And he is coming back every year as a part of our bonsai family, not only as a Master teacher but as a friend. In that way, in my humble opinion, he was and he stays "The Father" of croatian bonsai and "The Founder" of the internationaly recognised croatian bonsai scene.
So, Walter has a special responsibility for further development of croatian bonsai, and also for development and evolving of that outstanding natural material that we have.
Thank you Walter once again for everything you've done and everything you will in the future. 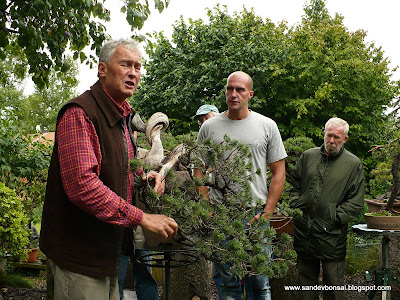 Walter is discussing Mauro's Pinus before Mauro proceeds with a Demo. 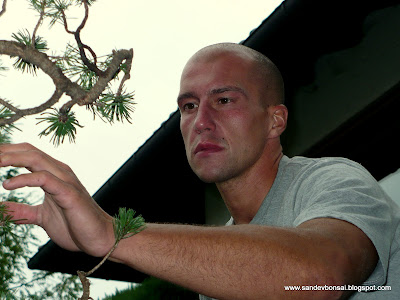 Mauro at work. In full concentration. 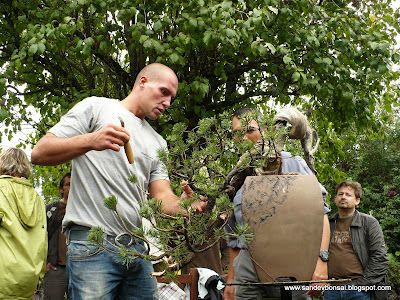 Mauro is making a starting decisions which branches to leave and which to make a jin. 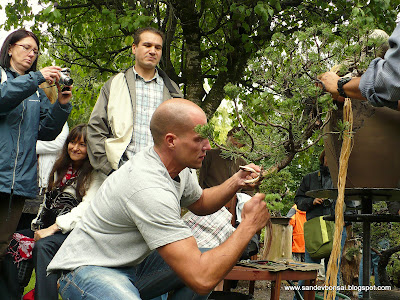 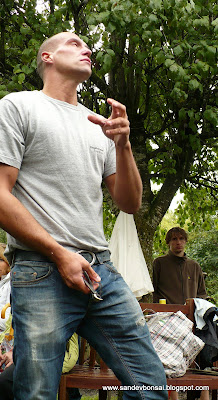 Mauro in a creative moment :) 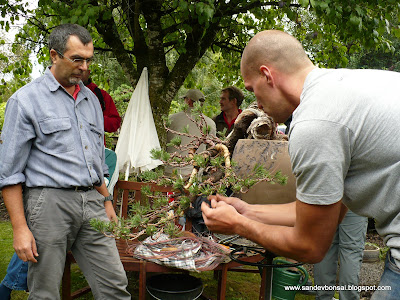 Wired branches are put in position. 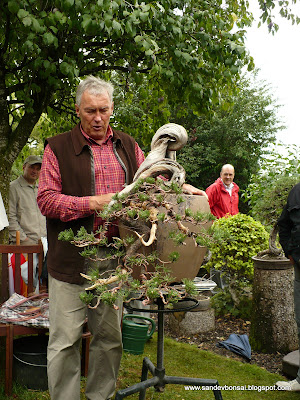 And the result is fantastic. A powerful and dramatic tree. A Mauro's great vision and skills performed for such a result. Here, Walter is discussing finished work. 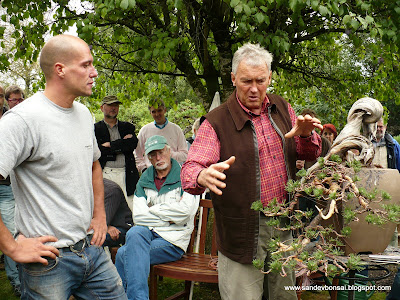 Yeah...the Powerful tree! Look Walter's eyes!
Let me say that, I was very happy that I had the opportunity to watch Mauro at work with such a great material. I think that it is absolutely necessary that a man with highly developed skills and bonsai techniques like Mauro, with a great artistic vision, to be able to show what he can do, he has to be provided with a material of high quality. It was a fantastic experience to see this interaction between Mauro and a wonderful cascading Pine tree.
The Demo was first class. 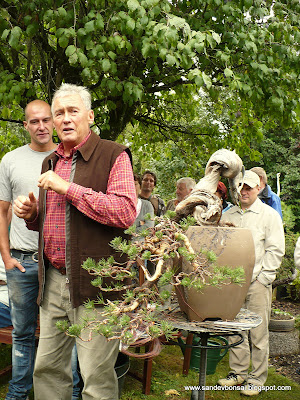 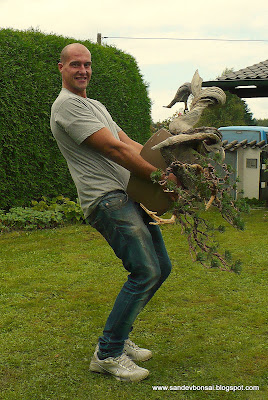 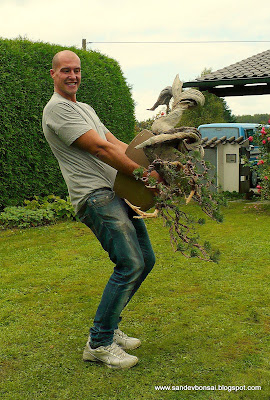 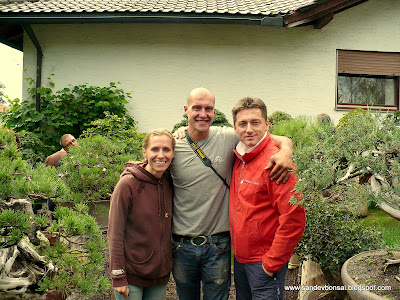 Mauro Stemberger is a great guy, a great Master of bonsai and a very pleasant man. It was a privilege to meet him and to watch him work.
His work is inspiring and highly technicaly skilled. He is nice, calm, friendly and good looking (the girls couldn't take their eyes off, but they were not looking at Pinus in the pot :)!
I can say as an announcement that Mauro will be holding a demo and a workshop in Zagreb next autumn 2010. Some preliminary arangements were made. All informations will be on time and we will be in touch with Mauro.
Mauro, thanks! Nice to have a new friend in our bonsai lives. 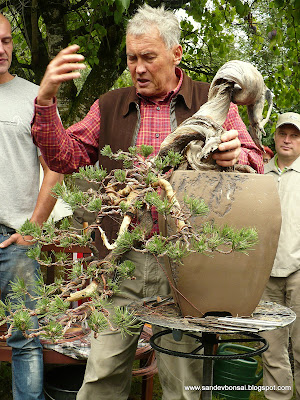 Walter and a "cascading dragon" 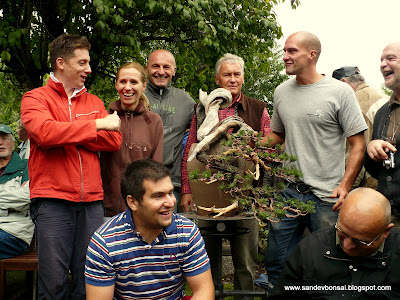 The Croatians with Walter and Mauro. 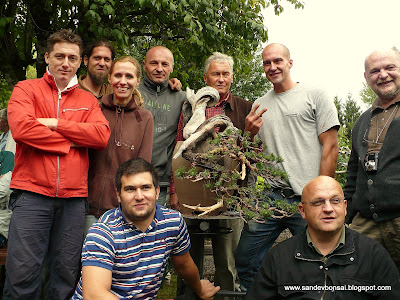 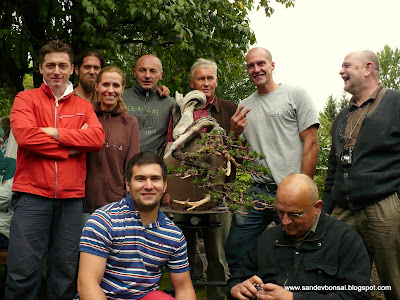 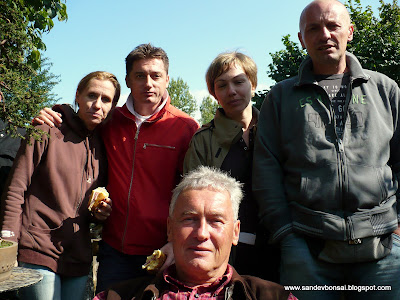 One photo with "The Father". 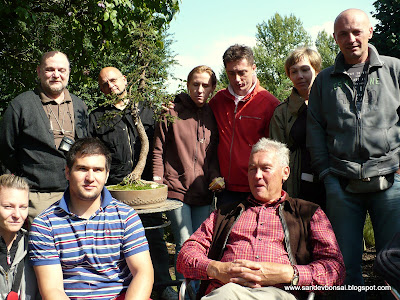 Croatian Premiere League with The Father. 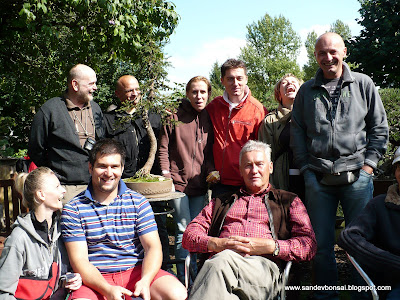 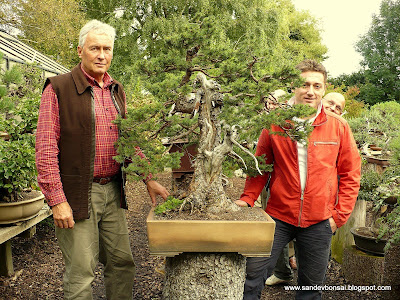 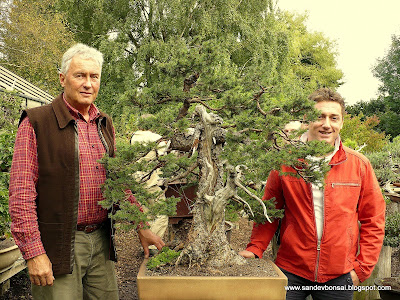 Thank you Walter Pall!
Posted by Sebastijan Sandev at 9:36 AM